You are here: Home / Balance System

How Our Balance System Works

The human balance system works through a constant process of position detection, feedback, and adjustment between the:

It is an automatic, silent system that never stops working. Dizziness, imbalance, and other symptoms alert us when one or more parts of this complex communication chain breaks down.

Role of the brain

Information from the vestibular system (inner-ear balance sensors), visual system (eyes), and proprioceptive system (muscles, joints and skin) is sent to the brain through the vestibulocochlear nerve (also known as the 8th cranial nerve). The brainstem sorts this information and combines it with information from two other parts of the brain called the cerebellum and the cerebral cortex.

All of these signals are put together and interpreted by the brain. The brain then sends signals back to the eyes and other parts of the body to react and keep the body upright.

There is much redundancy built into the balance system. The brain does not need every single bit of the massive amount of information sent to it from the vestibular, visual, and proprioceptive systems. Depending on what is going on, the balance system chooses which information to use and which to ignore. For example, when you are in a dark room and input from your eyes is reduced or unreliable, the brain uses more information from the proprioceptive and vestibular systems. Likewise, if a person has no sensation in their legs and feels as though they are standing on cotton wool, input from the visual and vestibular systems will be used to keep them upright. 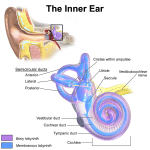 The vestibular system lies deep inside the inner ear. It is made up of 10 organs of balance – 3 semicircular canals and 2 otolithic organs in each ear. These structures sense head movement, for example when your head tilts, turns, or changes speed. Information from the inner-ear balance sensors travels through the vestibulocochlear nerve (also called the 8th cranial nerve) to centres in the brain.

The inner ear is divided into 2 main parts – the bony labyrinth and the membranous labyrinth. The structures in the bony labyrinth - vestibule, semicircular canals, and cochlea (organ of hearing) - are surrounded by a sodium-rich fluid called perilymph. The membranous labyrinth contains potassium-rich fluid called endolymph. The functioning of the inner ear relies on a mechanism that controls the amount and make up of endolymph and perilymph.

The superior, posterior, and horizontal semicircular canals lie at right angles to one another. They act like a gyroscope to detect different types of rotational head movement, for example when you bend down to pick something up or turn your head to look over your shoulder.

When the head is turned, the inner ear turns with it. There is a brief lag before the endolymph (fluid) moves within the canals. This movement causes the top part of hair cells (stereocilia) to bend. Receptors on these hair cells sense the motion. They send information about the change in head position to the brain through the vestibulocochlear nerve.

The otoliths differ in function from the semicircular canals. The otoliths are made up of two sac-like structures, the saccule and the utricle. They sense gravity (such as going up or down in an elevator) and linear acceleration (such as gathering speed or braking in a car).

The walls of the membranous labyrinth are lined with the endings of the vestibulocochlear nerve. It sends information about both balance and hearing to the brain.

Role of the eyes (visual system)

The vestibular system (inner-ear balance mechanism) works together with the visual system (eyes, muscles, and parts of the brain that coordinate vision). The visual system senses the direction and speed of head motion in relation to the world around you. It also keeps images steady when the head moves.

The vestibulo-ocular reflex (VOR) plays an important role in sending muscle commands back to the eyes from the brain. The VOR is an “eye driver” that aims and steadies your gaze. For example, it lets you focus on the words on this page even if you nod your head up and down or side to side. And when you walk, the VOR keeps your vision steady while your head bobs ups and down. A damaged VOR sends faulty signals to the brain and may cause movement-related dizziness, blurry vision, unsteadiness, and nausea.

Role of the skin, muscles and joints (proprioceptive system)

The vestibulospinal reflex (VSR) plays an important role in sending muscle commands back to the  body from the brain. The VSR works with the proprioceptive system to stabilize your body in space using gravity as a reference point. Damage to the VSR can cause imbalance and staggering.

When something goes wrong with the balance system

Many body systems send, process, and receive vital information about balance. It is not surprising, then, that a wide range of symptoms and disorders can happen when one or more parts of this communication chain breaks down. The complexity of the balance system, coupled with the number of things that can go wrong with it, often makes diagnosis of vestibular disorders challenging.