What is secondary endolymphatic hydrops?

Endolymphatic hydrops (EN-doe-lim-FAT-ick HI-drops) is a build-up of fluid in the inner ear. This can cause vertigo, hearing loss, tinnitus and feelings of ear blockage or fullness.

Primary endolymphatic hydrops happens on its own, without an underlying cause. This is a theory for why Ménière’s disease develops.

By contrast, “secondary” means that the fluid build-up was caused by another problem, such as an underlying disease or an injury. 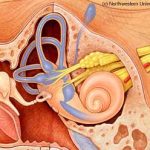 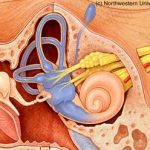 The fluid in the inner ear (known as endolymph) helps the cells in the inner ear to function normally. These cells detect sound, pressure changes, and changes in speed or direction. When there is too much fluid, the cells may not work properly, which can cause hearing loss and vertigo. However, not everyone with endolymphatic hydrops has symptoms.

The build-up of fluid in the inner ear can be caused by trauma (injury) or inflammation. SEH can happen weeks, months or even years after the trigger that caused it. If SEH happens long after a disease, it is known as delayed SEH.

SEH can happen after:

It is possible that head injuries can also cause SEH.

The symptoms of SEH include:

Some people have hearing loss caused by illness. With delayed SEH, vertigo symptoms can appear months or years later.

How SEH is diagnosed

You will probably have some of the following diagnostic tests:

Some of these tests are done to rule out other health problems. Several other conditions can cause the same symptoms as SEH, so your ear specialist needs to consider all the possibilities before making a diagnosis.

Treatment and management of SEH

Treatment for SEH involves identifying and treating what is causing the problem, if possible, as well as making changes that can help make the symptoms less severe.

The treatment or treatments that your healthcare team suggests may depend on:

Your ear specialist may want to try lifestyle changes and medication first, especially if your symptoms are mild. If these do not work, other more invasive options may be suggested, such as ear injections or surgery.

Diet changes are often recommended for people with SEH. Keeping a health diary may help you determine whether or not these changes make a difference. The most common changes are:

Medications that may be prescribed for SEH include:

Be sure to tell your doctor about all the medications you are taking, including vitamins, minerals, and herbal, homeopathic or over-the-counter medications. These can sometimes cause side effects or make other medications less effective.

Some people find that specific things trigger attacks of vertigo. Triggers may include:

Your doctor may suggest that you keep a diary keep a diary of your symptoms and possible triggers to see if there are any patterns. If you find that certain things trigger attacks, it is a good idea to avoid them as much as you can.

If medication and lifestyle changes are not enough, more invasive treatments may be needed. Some treatments involve injecting medication into the middle ear through the eardrum (transtympanic injections). In most cases, these treatments are done over several sessions.

Rarely, if other treatments do not work, and vertigo is severely affecting your quality of life, one of the following types of surgery may be recommended:

Most patients will have some symptoms after vestibular neurectomy or labyrinthectomy, including dizziness, blurred vision and unsteadiness. Usually, they will need vestibular rehabilitation. Be aware that any destructive form of treatment comes with a risk. You may end up with bilateral vestibular loss and have more serious impairments.

Attacks can happen suddenly, so it’s important to be prepared. Talk to your doctor about what medications you can take when you have an attack. Ask if there are any situations where you should call your doctor or go to a hospital.

Keep supplies available. These might include a fleece blanket, a thin pillow, a yoga mat, kidney-shaped trays to capture vomit, a cup of water and “bendy” straws, and a face cloth.

During an attack, try to do the following:

After an attack, you may feel sleepy. It is OK to rest for a short time, but as soon as you can, try to get up slowly and move around carefully so that you can regain your balance.

Let your friends and family know how to recognize an attack and what they can do to help you. Attacks can be quite long, so have a strategy for extended support. Share your preferred plan for care with friends, relatives and employers.

SEH is different in different people, so your doctor probably will not be able to tell you exactly what to expect. Some people have mild symptoms and only one or two attacks. Other people have severe symptoms and frequent attacks. For many people, the disease follows a pattern of remission and exacerbation, meaning that the symptoms get better for a while and then get worse again.

SEH changes over time. For many people, the vertigo attacks eventually go away on their own, but the tinnitus and pressure usually stay the same and the hearing loss usually gets worse. People may have constant balance problems in the later stages of the disease.

In the later stages of SEH, some people have episodes where they fall to the ground with no warning, but do not lose consciousness. These are called Tumarkin’s otolithic crisis or simply drop attacks. Some people only have one drop attack; others have several over the course of six months to a year. In most cases, drop attacks go away on their own, or they can be treated with steroid injections. Some people never develop drop attacks.

From time to time, opportunities may arise to participate in clinical trials studying new treatments for SEH.

Hain, TC. Etiology (cause) of Ménière’s syndrome. Dizziness and balance.com. 2019. Available from: https://bit.ly/2FY7G16

Hain TC. Meniere's Disease treatments that may be placebos. Dizziness and balance.com. 2017. Available from: https://bit.ly/2NHMiBI

If you find our information valuable, we ask you for your help. The cause of supporting those affected by balance and dizziness disorders with up-to-date, evidence-based information written for Canadians, needs you. Will you consider becoming its champion by making a gift or becoming a member?

BC Balance and Dizziness is proud to announce our recently posted article on vestibular paroxysmia. ... See MoreSee Less

Some great ideas to help us all stay connected during Covid-19... ... See MoreSee Less

How To Stay Connected During Self Isolation - COVID-19 - Drawing Change

The @CanadaCares_ campaign is calling for a federal donation matching fund to double the impact of donations and empower the charitable sector. Government and citizens can work together to extend the vital work of charities. Learn more & join the campaign: CanadaCaresCampaign.ca. ... See MoreSee Less

BC Balance and Dizziness is proud to announce the thirteenth article in our 2019/2020 series. This one is about CANVAS syndrome. ... See MoreSee Less

Be careful! Falls are the leading cause of hospitalization for seniors. You don't want to go there! #fallprevention http://ow.ly/r0rx50DcKHG

BC Balance and Dizziness is proud to announce our recently posted article on vestibular paroxysmia. https://balanceanddizziness.org/vestibular-paroxysmia-article/

How To Stay Connected During Self Isolation - COVID-19 https://drawingchange.com/how-to-stay-connected-during-self-isolation-covid-19/