It is not clear how many people have SCD. It seems to be more common in older adults, but young children can also have SCD. Some people have a hole in the semicircular canal, but do not have symptoms.

It is not clear what causes these holes. In some cases, they may happen as part of fetal development. In other cases, they may be caused by injury or thinning bone later in life. Scientists are still researching this question. 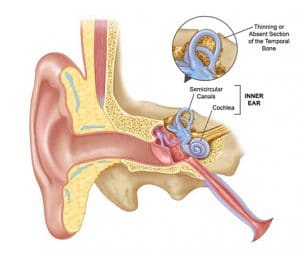 The inner ear has two connected parts: the semicircular canals, which help you balance, and the cochlea, which lets you hear. These structures are surrounded by bone and filled with a fluid called endolymph.

There are three semicircular canals in each ear, arranged at right angles to each other. They sense when your head tilts or turns. For example, if you nod your head yes, the endolymph in the superior semicircular canal tries to stay still while the canal moves. (Imagine you are holding a loop of clear garden hose, with one end in each hand, and that it is partly filled with water. If you raise one end of the hose, the water will move toward the other end, because it is staying in one place while the hose is moving.) This makes the endolymph push against specialized hair cells, which send a signal to your brain that your head is moving. This is an important part of the brain’s balance system.

The oval window and the round window are membranes. The rest of the inner ear is rigid, because it is encased in bone. Normally, this means that the round window and the oval window are the only parts of the inner ear that move in response to sound waves, so the sound waves stay in the cochlea. But if there is a hole in the bone that covers one of the semicircular canals, there is now a “third window” in the inner ear. This means that instead of staying in the cochlea, some of the sound waves can leak into the semicircular canal. This leads to several problems:

Sometimes the hole is up to two mm across. But the hole can be as small as a pinhole and still cause symptoms.

The symptoms of SCD vary from one person to the next. SCD can cause both hearing and balance symptoms.

Hearing symptoms of SCD may include:

How SCD is diagnosed

SCD is usually diagnosed by a specialist, such as an otolaryngologist (an ear, nose and throat or ENT doctor) or a neurologist.

You will likely have the following diagnostic tests:

Treatment and management of SCD

At present, the only treatment that addresses the cause of SCD is surgery. But if your symptoms are mild, the drawbacks of surgery may outweigh the benefits. Your doctor may suggest starting with less invasive ways to manage your symptoms.

Your doctor will want to see you regularly to follow up on how you are doing and see if how your symptoms are changing. SCD will not get better on its own. Your symptoms may stay the same or, without surgery, get worse. Symptoms may increase as you age - the thickness of the bone over the superior semicircular canal decreases.

Surgery for SCD is usually suggested for people whose symptoms are severe and who find that other approaches do not help.

There are several different surgical options, including:

Which procedure is used will depend on various factors, including:

Some techniques have better results than others, and some have a higher risk of hearing loss. Your surgeon will discuss the risks and benefits with you, including potential side effects and how long it usually takes to recover from the procedure.

Some of the symptoms of migraine are similar to those of SCD, and SCD can trigger migraines. If you have migraines, it is important to have them under control before surgery.

Similarly, head injury sometimes causes SCD, but the symptoms of concussion and SCD can be similar or overlap. It is important to be sure that SCD is causing your symptoms before moving ahead with surgery.

Most people who have surgery for SCD have good outcomes, with fewer symptoms and a better quality of life. The most common side effects of surgery include:

People tend to take longer to recover after surgery if they have:

Researchers are studying the causes of SCD, as well as ways to prevent, diagnose and treat it. Surgeons are also developing new methods and improving existing methods so that they work better and take less time to recover from. Some researchers believe that one day it may be possible to use custom 3-D printing to cover the hole.

The following can offer more help and support for affected individuals and their families.

The musician who heard too much
Watch a short documentary (YouTube) on a musician treated by Dr. Lloyd Minor, the inner ear expert at Johns Hopkins University who first described SCD.

Most of the titles listed are available for loan through public libraries. If your local library does not own a copy, ask for it to be sent from another library through interlibrary loan.

A Hole in My Life: Battling Chronic Dizziness by Philippa Madeline Thomson (2016) 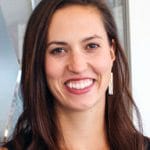