Vestibular paroxysmia causes short, recurring attacks of vertigo. Each attack can last from less than a second to one minute. People can have episodes of many attacks in sequence, up to thirty per day. Other people only have a few attacks per year. The attacks usually happen without warning.

Vestibular paroxysmia is caused by damage to or pressure on the vestibular nerve (also called the 8th cranial nerve or vestibulocochlear nerve), which carries signals to and from the inner ear. 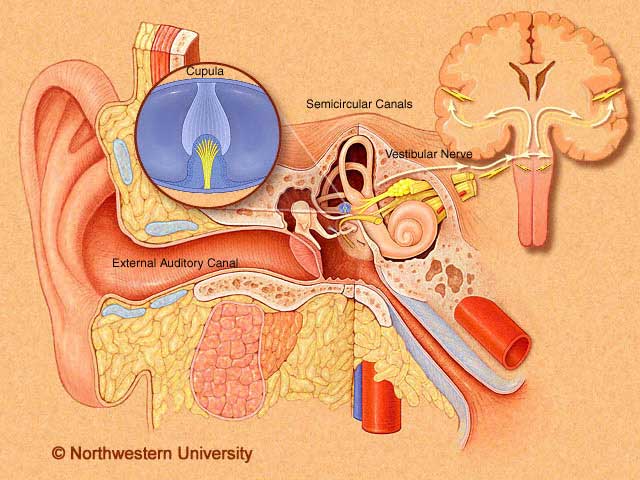 This damage may be caused by:

Researchers believe that damaged nerves that are close together sometimes “short circuit,” which causes attacks of vestibular paroxysmia.

Symptoms of vestibular paroxysmia may be different in different people, but each person usually has the same pattern of symptoms during an attack.

In most people, attacks of vestibular paroxysmia happen without warning. Some people find that turning their head to a particular position triggers attacks. Some people have attacks when they are breathing heavily (hyperventilating) or exercising.

Each attack usually lasts less than 1 minute. But people may have multiple attacks in a row, sometimes as many as 30 per day. Vestibular paroxysmia is usually a chronic disorder, which means that it lasts longer than 3 months, with some people having many hundreds of attacks per year. In some people, the attacks get longer and more frequent as the disease progresses.

How vestibular paroxysmia is diagnosed

Vestibular paroxysmia is usually diagnosed by a specialist such as a neurologist, an otolaryngologist, neuro-otologist or an audiologist.

So your doctor needs to rule out these other possible causes before making a diagnosis of vestibular paroxysmia.

You will probably have some of the following diagnostic tests:

Definite vestibular paroxysmia is defined as:

Probable vestibular paroxysmia is defined as:

Vestibular paroxysmia can often be treated with low doses of anti-convulsant medication such as carbamazepine or oxcarbazepine. In one study patients treated with these drugs had attacks that were 90% less often, 85% less intense and 89% shorter. Other medications are also being studied.

If medication does not work, and no obvious cause like a tumour or cyst is visible, microsurgery to separate the vestibular nerve (also called the 8th cranial nerve or vestibulocochlear nerve) from the blood vessel pressing on it may be considered. However, it is often hard for doctors to figure out with certainty which side is affected. And there is also a risk of a brainstem infarction (stroke) during microvascular decompression surgery.

If the condition is caused by a tumour or a cyst, surgery may be recommended.

What to expect in the future.

There is still a lot that we do not know about vestibular paroxysmia. Researchers are still studying what causes it, how many people have it, and the best ways to define, diagnose and treat it.

In children, vestibular paroxysmia may go away on its own.