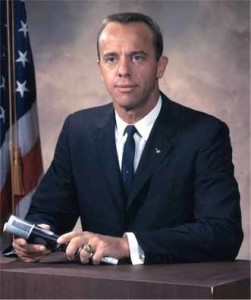 Alan Shepard is famous for walking on the moon. Prior to becoming a pioneering NASA astronaut, Shepard had already made a name for himself as an aviator and test pilot. But the leap from test pilot to walking on the moon almost didn’t happen. After being named a command pilot for the Gemini mission in 1964, Shepard began experiencing dizzy spells, eventually being diagnosed with Ménière's disease.

Reassigned to a desk job, Shepard pursued treatment for his condition for the next six years. He did not give up believing he could be cured. After all, he was on a mission. “I didn’t like it at all,” Shepard recalls. “This problem is called Ménière's disease. It causes dizziness, nausea, lack of balance and so on. The prediction was that in some cases it was correctable. I said, “In my case, it is going to be correctable.”

Shepard’s determination to find a solution to his Ménière's condition led him to try a new procedure involving placing a shunt in his inner ear (endolymphatic sac shunt surgery). Despite being warned that the odds were only 20 percent for a cure, Shepard jumped at the only chance for him to return to being an active astronaut. It worked. He was cleared for the Apollo mission, landing him on the moon, the image of him swinging the legendary golf club now an iconic symbol of the space program.

There are times for Ménière's sufferers when it seems that the odds are daunting that we can ever be cured. We are not always given much hope for any treatment. Avoiding salt, changing diet, walking and reducing stress can help alleviate some symptoms. Endolymphatic sac shunt surgery works for some people but is a mixed bag for others.

Every Ménière's disease patient could learn from Shepard’s determination. Ménière's and the tinnitus that accompanies it can be managed and, in a few lucky cases, cured. You may never swing a golf club on the moon, but you do have options to help you cope. And in some cases, like that of Alan Shepard, you many even find a cure.