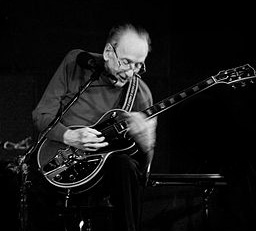 Les Paul is most well-known as the inventor of the electric guitar. Still favoured by rock musicians the world over, his signature guitar bearing his name can be found on records by the biggest names in music over the past half-century.

A celebrated jazz guitarist himself, Paul was named the 46th best guitarist of all time by Rolling Stone in 2003. That’s just one of many honours the guitarist has received. Paul received the National Academy of Recording Arts & Sciences Trustee Award in 1982. He was inducted into the Rock and Roll Hall of Fame in 1988.

Les Paul first made a name for himself as the instrumentalist in a duo with his wife, Mary Ford, in the 1940s and 1950s.

Aside from the invention of the electric guitar, Paul pioneered multi-track recordings, allowing multiple instruments to be layered upon one another, a staple in modern recording.

Stricken with arthritis, Paul also battled the debilitating effects of Ménière's disease over much of his later life. As related by the New York Times not long before his death:

“Working around his maladies is nothing new: A 1948 automobile accident in Oklahoma so mangled Paul’s right arm that he instructed the doctors to set it at a right-angle so he could continue playing. Since 1980 he has undergone quintuple bypass surgery and several operations for Ménière's syndrome, a vertigo-inducing ear disorder. “There’s a way out of everything,” Paul says in his soft, gravelly voice. “You just have to have the determination and will to go in there and fight.”

Despite the tinnitus and vertigo associated with Ménière's disease, Paul’s fighting spirit kept him in the game. His inventiveness and creativity kept him active well into his 90s, even though his crippling arthritis and bouts with Ménière's disease might have been a hindrance to a less resourceful and strong-willed person to succeed and overcome.

Les Paul’s hard work in dealing with Ménière's disease is typical of driven, successful people. Dealing with Ménière's, or any vertigo-associated disease, requires vast amounts of patience and hard work. It is not easy. But the effort to improve one’s lifestyle and explore treatments can reap big rewards. It is important to keep in contact with other vertigo sufferers to ensure that you have the latest information on dealing with the disease.